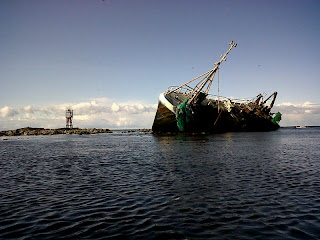 The forecast was for a NW wind 4-5. As this stretch of coastline is pretty rocky I wanted to take a look first, but as we arrived at Portessie things didn't look too bad - though it was piggin cold again!
A quick sprint out through the surf and away. The coastline was quite scenic but there was still a swell running from the north so I headed further out to find smoother conditions.
The sun was out and the wind behind me, probably a top end 3, good conditions for the Taran. The miles dropped away quickly as I watched the rocky coastline and sandy beaches slip by.
2-3 miles from Troup Head things started to get bouncy and confused, it seemed to go on forever, by the time I got there I was shattered. But then I noticed the Gannets, an impressive sight as they soared along the cliffs. They also noticed me and soon as I sat there open mouthed I was circled by thousands of them (I seem to recall that Troup Head is the only mainland colony of the bird).
A few more miles to Rosehearty, a little disappointed not to try a pie from the butcher's there but time to strike onwards to Fraserburgh.
I found myself flogging against the tide for a while and then a slightly nervous crossing of the harbour entrance to the sound of rumbling marine diesels.
After dodging a couple of breakers I stopped to take a look at the wreck at Cairnbulg which it appeared had come to an unfortunate end on the reef.
Not far to go now, a little nervous as I sneaked through more breakers on the reefs just off St Combs - all rounded off with a picnic in the sunshine on the beach, chatting to locals eating their fish and chips. A good mileage in good weather, not a bad day. Heading S again now, of course tomorrow the wind is forecast to go SE - yeah, yeah.
Posted by Performance Sea Kayak at Sunday, May 06, 2012

There's also a mainland Gannet colony at Flamborough Head in Yorkshire...I should imagine you'll be there pretty soon!

Looks like you are making good progress John. JM

Hope you don't find the next stretch of beach too monotonous! You're doing well..