Captain Underpants and the attack of the talking toilets 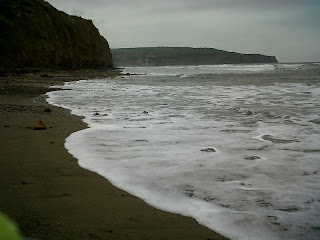 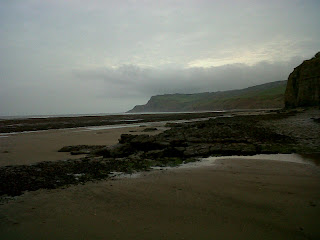 The day started pleasantly with a chat with the farm owner; we talked about the boat, the farm, the view and even an introduction to his Alpaccas. But of course the tidal clock was ticking and all to soon it was time to head down to the beach. Though the world had shrunk overnight it was still a bit of a trek.
The surf was dumping, but of course it's all in the timing. Not my timing though, I took a bit of a beating on the way out. There was kit dangling from lanyards everywhere, maps all over the place, a shrink wrapped deck and a split blade trying to go up my nose. I also felt my rib pop out, not the end of the world but I'd rather it hadn't - that lump will stay for a while now. It was one of those days when you just know you've screwed it and just hope that not too many people are watching (Oooh that's going to hurt...) I've also been blowing things out of my nose all day that look suspiciously like small pieces of coal.
Anyway, off to Hartlepool and across the mouth of the Tees. I counted 14 big boats inbound or waiting to be inbound. Tees VTS were a bit confused by my phonecall and now they weren't answering my radio calls, I felt like I was being left out of the party. Oh well, I'm going anyway, we'll argue about it later. It was stressful but I thought I'd got away with it when the Pilot boat spotted me - they couldn't really not spot me considering how close we were. It all reminded me of that day when the police helicopter grassed me up to the lifeboat off Rhyl, but that's another story.
Anyway I got across and then settled into a few more grey and choppy miles, same swell as yesterday 2-4ft - 6ft now and then. Somewhere along the coast the Fisheries Protection steamed in like I was trying to steal the last of the cod stocks; satisfied that I wasn't they soon departed. Though, I've never seen anyone use binoculars to look such a short distance, they were so close I could see what make his binos were.
Things were going OK though so I phoned Mission Control to ask if she could scrounge a place at Boggle Hall YHA.

More grey miles along impressive cliffs when suddenly off Whitby things changed. The wind strengthened and went to a headwind and the swell became unfriendly. Doubts started popping up; I knew there was no landing between Whitby and Robin Hood's Bay, and I had my doubts about Robin Hood's bay at that. The fishing boats were all heading the opposite direction too, unsmiling. The birds had gone and the only yacht was motoring reefed in - all not good for the confidence.
Finally I got to RH bay were a couple of fishermen told me where they would land, at least I had an option - they didn't rule out Boggle Hall completely either, not quite.
The shore was all scars with a strong along shore drift, but I sneaked a gap (and the surf too) to land. Now an adventurous trek back along the bottom of the cliffs, in knee deep surf along the scar to finally make it to Boggle Hall - you can paddle right up to the door at HW - my arse you can! . (Thanks to Justine + Barry for the lend of your trolley, it's bailed me out twice in two days now - I owe you).
I like Boggle Hall. I arrived not only to find I had a booking, but a room and a 3 course meal too! Thankyou once again Mission Control.
So what would I like for my tea/dinner/ evening meal (delete as appropriate depending on north/south divide and poshness)? Scanning down the menu I saw the word 'Massive', it didn't matter what it preceded it would do! (Pizza apparently - and I was assured it would be).
And after a couple of Riggwelters everything looks a fair deal more rosy, quite a memorable day.

Hello to Norman H. Sorry Norman I didn't realise you were at Newbiggin until Phillip said today, I would have landed on the beach for a quick chat if I had known. Thanks for your comments too; not bad for a crab eh?

Little Brother has been very busy lately preparing for the 'North West Boat Show', good luck for this weekend - hope you have good weather! Pop along to Bridge House Marina, Garstang if you fancy saying hello and having a look around.

Apologies to Aled for going all Zen/Level 5 the other night. I should have stuck with the ' By **** it's lovely!' line of course.

And the pizza? Was it really massive? Well of course massive is a big word...

Just looked at the beach at LW - bugger.
Sent from my phone

Posted by Performance Sea Kayak at Thursday, May 17, 2012

"they were so close I could see what make his binos were." Absolutely classic John. Keep on keeping on......

was it the green deck that tried to shove itself up your nose?
Fat lad from Notts :o)