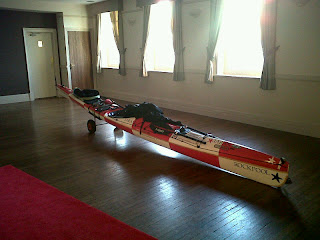 A few days ago I marvelled as the wonderful beaches and intriguing creeks of North Norfolk glided through the mist. Yesterday I watched the impressive sand cliffs blending into the hidden coverts as the Suffolk heritage coast slipped politely by.
Today I arrived in Essex.
Though the campsite was pleasant, at £13 it had a rather over inflated sense of it's own self worth - rather southern really I thought. I liked sleepy Sizewell though, but yet again it was a launch through dumping surf. Not sure if I prefer it; the stress levels are higher but then they don't last as long!
Once again turn right and paddle. 2ft swell again and a light breeze, but as the day went on it got pretty warm. I figured it was going to be a warm one when I saw the first bikini by 9:30 - one advantage of those steep beaches, you can get fisherman-annoyingly and bikini-spottingly close in.
Aldeburgh looked pretty and I believe serves good ice cream, but of course no time to stop. But what about that ugly lifeboat station on the foreshore? Why can't architects design something that fits into the already pretty surroundings, instead of making a statement, and an arse of themselves?
Anyway; the very long gravel spit that separates the River Alde was intriguing as was Orford Ness. It had a certain mystery history about it - on the revisit list.
Then it was an increasingly warm straight line down sarf towards Felixstowe. The rather large boat that appeared ahead highlighted the line of the VTS nicely, it was a surprisingly narrow channel to cross. Someone wasn't having a good day though as I dodged the lifeboat towing (non too gently I must say) a small yacht back home - it was kicking up the sort of wash to make Harry drool.
I started to struggle a little now but finally passed The Naze and the long(est?) pier at Walton-on-the-Naze.
Frinton had countless beach huts in parallel rows along the shore, but in contrast to the cheerful multi-colours yesterday at Southwold, here there was only blue, white or brown - don't enjoy yourselves now folks.
Campsites looked thin on the ground around here so Mission Control moved into accommodation mode. An email arrived with details of the Kingscliff Hotel, and even the nearest slipway - it feels like an episode of '24' sometimes!
A sneaky but only slightly dodgy landing saw a welcome end to the day and then after a quick 'dry', a trolley up to the hotel.
Faye was extremely helpful and as you can see 'Mary C' is esconced in veritable kayak luxury in the function room - thankyou very much - www.thekingscliffhotel.com.
While Mary C lived it up I ate the best pie of the trip (by far - and it pains me to say that this far south) in the bar, and as you can probably tell I partook in a couple of beers.
Tomorrow involves what at first glance seems quite a complicated crossing of the Thames Esturary - to be honest it might be easier to do a suck it and see ferry glide - done a fair few of those over the years.
All in all not a bad intro to 'down sarf', just didn't realise there would so many southerners - or that they really speak like that.


Sent from my phone

A night of luxury well deserved! Hope you've had a good day in the sun (hopefully) today. M and D