I am no expert on the wildlife I saw, but like most sea paddlers I am pleased and fascinated to get close to the wildlife whilst on the water. The trip brought many opportunities to see this wildlife close up, but to be honest I thought I may have seen a little more.

The poor weather put paid to that I suppose; many of the paddling days were completely alone, no other human life in sight for the whole day nor any animal life either. Those became very lonely days, self doubts would creep in - surely I had made the wrong decision if I was the only creature on the water - not even the birds? It was surprising how much of a boost the sudden circling of a Shearwater or the sighting of a distant yacht sail could bring at times.

There was a noticeable change in both the distribution of birdlife and the behaviour as the miles clocked up. This illustrated the scale of the trip in both distance and time.

The South Coast from the Thames down to W of Lyme Bay was noticeably lacking in any form of wildlife, even on the good weather days there was little more to see than the Cuttlebones floating on the surface.

As I hinted at in one of the daily posts, the birds did become my little feathered weather forecasting friends. In Scotland where I was being battered regularly by some significant squalls one of the markers hinting at an imminent battering was the sudden disappearance of the accompanying bird life. Likewise I was glad to see the return of the birds, it hinted at better weather to come in the short term. I watched for this behaviour on a daily basis throughout the trip - do they use Magic Seaweed?The only exception to this was the crossing from Trevor to the Menai Straits in rather serious conditions where I was accompanied by a number of Shearwater wheeling and diving through the troughs. I thought it unusual to see them in such large conditions and they rather ominously took on the appearance of low level vultures in my mind.

Here is a list of some of the wildlife I saw whilst on the water on the way around: 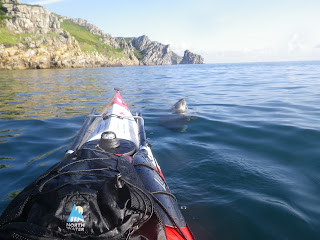 There were also, of course, various land sightings - memorably:
the bold Blackbird who I fed at Mullion Cove,
the cheeky Sparrows perched on the tent at Lundy,
the raucous Rooks at Polzeath,
the fledgling Starlings who sat at my feet waiting to be fed in Bude.

And of course all the characters involved in the all too early dawn chorus, every bloomin' day!

I was a little disappointed still not to have seen my first Basking Shark or Whale, but then this gives me an excuse to go around again sometime...

At the finish at Cemlyn Bay we were lucky enough to meet Kathy, a rather enthusiastic warden there. You can take a look at her Cemlyn based Blog here: