Another day, another headwind - Arisaig to Sandaig 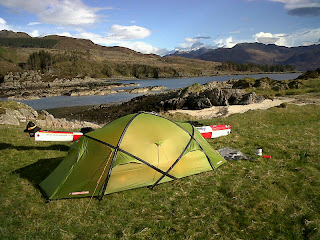 During the night I had a visit from the Rozzers, well I guess it was them - flashing lights and big torches.
They shone their torches at my tent for a while, so I shone mine back at them, so they got a bigger torch and shone that. Eventually I guess they were happy that they had won the battle of the torches and they got back in their sticky little car (still with lights flashing) and knobbed off.
Anyway, as expected I awoke feeling pretty shitty (sorry Mum). But I have a well practiced routine to deal with such days, I do cock all for a while.
So I did; once I'd finished doing cock all, I just faffed, nothing productive just a good old faff. Then I did a little more cock all for good measure.
Eventually I felt a bit better and started to get everything together.
On the water the headwind was still there and I slogged my way up the Sound of Sleat in a F3-5 dead on the nose - tedious, tiring and frustrating - nice scenery though.
Later frequent squalls came rolling down the Sound. I was making poor progress (Skye Bridge just wasn't to be) so eventually I decided to call it a day, disappointed in only a 17nm covered. But I had stumbled across an idyllic spot at the Sandaig Islands. Time to watch the sunset and get some rest.
Posted by Performance Sea Kayak at Monday, April 23, 2012

Hello John. Did some research and found your blog, will keep following your journey. I have posted your parcel today from Craignure. Enjoy the sunset and hope you sleep better tonight. Regards Shawn at Craignure campsite.

Hallo John
We too are following your journey. We hope weather will be good in the next days. Fotos are very nice and sky looks as blue as in Kreta.
Viele Grüße Peter und Matyse