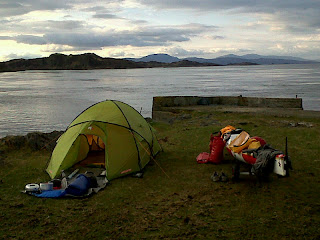 Set off from the beautiful Point Sands with calm weather at last, didn't even need a cag initially. No swell, no chop, no stress!
Still had the obligatory head wind of course but even that had dropped to a gentle breeze.
Had the company of a few porpoises for a while, one laid motionless on the surface for a time - not seen that before.
Made steady progress up the Sound of Jura, with only me, my thoughts and the scenery for company.
The breeze strengthened and things got a little choppy as I neared the top of the Sound. I was pushing late in the tide and was a little nervous of the flow from the Corryvrecken on one side and Dorus Mor on the other, but everything ran quite smoothly.
As I approached Scarba the tide was changing in the Sound of Luing so I closed on the shore of Scarba to use the eddy. As I came in close I saw an impressive Stag on the water's edge, surprisingly he did not take fright and we watched each for a while until I had to move on.
Eventually I pulled up on a small jetty on Scarba to make camp for the night. From the tent I can see the hills on Mull where Pascale and myself have run in previous years, fond memories. Can hear to roar of the Grey Dogs from the tent too.
Tomorrow a short leg to Craignure to collect a resupply parcel from the Post Office - not sure whether to carry on or chill out for the remainder of the day - pub, cafe, shop - hmmm...
Posted by Performance Sea Kayak at Friday, April 20, 2012

Hi John...glad you've had a better day..campsite looks awesome !
Don't want to tempt you too much but they do a great plate of haggis'n neaps at the Craignure Inn !

Great going John - following your progress with interest...
Cheers
Will