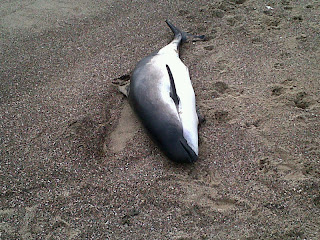 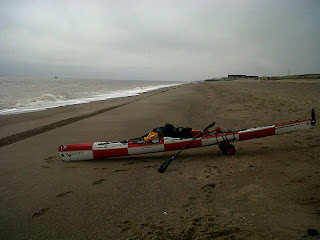 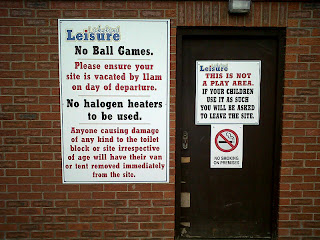 Another short day unfortunately, but they do seem to bring bonuses.
The day started slowly, I felt as rough as a badger's arse to be honest. I figured this was probably the aftermath of the physical day yesterday - long miles and bit stressful.
But eventually it was time to drag everything over the berm, where sadly I came across a porpoise washed up on the beach. The surf was not dumping the same as yesterday, but it still called for a little sneaky timing - then we were off.
N wind in the high teens (mph) with a 2ft chop. Rather than cut straight across to Norfolk I figured I'd scratch along the coast for a while, to take in the sights, such as they were.
But something wasn't quite right, things weren't warming up as they should and by the time I reached Skegness the wheels came off well and truly. I hauled out on the beach and picked a quiet spot for a snooze, feeling decidedly queasy.
I'd just dropped off when Lincolnshire's loudest and longest laughing lady turned up, she installed herself next to me and promptly lived up to her title. Eventually someone dragged her off to be annoying elsewhere, but the chance of a snooze had gone.
Tentatively I got back on the water and headed out to cross the mouth of the Wash. Conditions picked up a little as I moved out but never more than 3ft. Unfortunately I didn't get the glimpse of the Wash I had hoped for due to the haze, in fact I didn't see anything until a few hours later when I pretty much ran into Norfolk.
The sun was out now and the chop was settling nicely but I wasn't feeling any better unfortunately. So after a quick consultation with Mission Control I decided to call it day and go for an early night.
The beach along the coast is beautiful and as I sat on the edge of the surf I watched the flow heading up Gypsy Creek (I didn't know the name initially) and so I followed it. Another inadvertent special discovery; 4 seals were floating around in a freshwater pool above the low water mark, I also came across a sandbank that turned out to be made entirely of countless razor clam shells - impressive, though probably not if you are a razor clam.
Just as I was preparing my food Patrick and his labrador Kinder passed by and stopped for a chat.
We talked of the creek, the trip, Patrick's dog, sailing trips across the Humber, Lord Nelson's early days and so on. It occurred to me that there are much worse ways to finish off a day than to have a pleasant chat in such a setting - once again clouds and silver linings I figured.

Sent from my phone
Posted by Performance Sea Kayak at Wednesday, May 23, 2012

I hope you feel better tomorrow John. Sounds like you still keep meeting some fantastic people though and you certainly are in a beautiful part of the world.
Barry

Hi John, I've been following and enjoying your blog daily from day 1. Currently stuck in India; your post raises a smile and brings back thoughts of home. Best wishes for the rest of your trip. Stay safe.

Hope you had a good rest last night and you're on better form again today. It was really good to see you, although we probably contributed to the badger's arse feeling yesterday (no more wild beach parties!!!!!). Stay safe Mike and Deb

Good to see you are in my home county of Norfolk. It does have some lovely paddling areas along stretches of that coast, but at the speed your Taran is moving it may be just a blur!
Great blog really enjoying reading about your journey and obsevations of people & places.