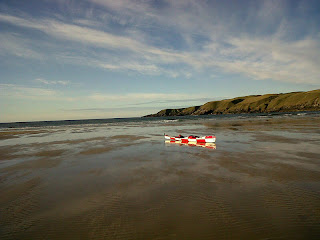 Monday was a resupply day, so up to the post office to pick up a rather solid parcel. The sun was out though the breeze was chilly, no hurry for the tide so I took my time.
Back up to the P.O. to send the old maps back and then down to the beach. As I went down the hill I walked under the edge of the cloud, out of the sun it was quite chilly - 6 degrees on the little machine.
Finally off the beach, smoothly out through the surf and on to Whiten Head. Rounding the Head things became quite lumpy as I turned into a F4 from the east, another pogies and double hat day!
As the day went on the wind strengthened steadily into a F5 and the conditions didn't get any better. Eventually I realised that I wasn't making enough ground and Strathy Point was out. I was running out of steam and getting cold and so time for Plan B - Armadale Bay.
The Bay took a while arriving but as I arrived the sun came out and I had a nice dry run through the surf. It was a chore getting all the gear on to the top of the dunes but eventually I was esconced in a most palatial camping spot - nice.
Later on I met Arron as he wandered the beach, Arron was good company. He was just walking; he had done the length of Wales, the Lake District, the East coast of Scotland and so on - he walked a bit, worked a bit and then walked on again - impressive!
Paddling wise it was a tedious and tiring day, but it was hard not to smile at the end of the day - what a setting.
Posted by Performance Sea Kayak at Tuesday, May 01, 2012