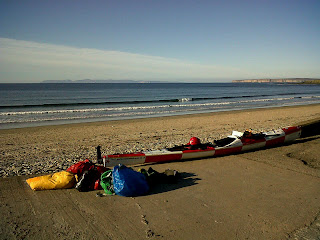 Down the dunes and another dry run out through the surf, I was quite pleased with that one.
Compared with yesterday's cloud, today was blue skies and bright sunshine. But once again as I rounded the head it was straight into a solid and cold top end F4. Just as it was becoming tedious it suddenly dropped off, things calmed down a little too and it became quite pleasant - a gentle F3 from the front. The miles were ticking off nicely and the Orkney Isles were crystal clear over to the north; but yesterday's short day had a knock on effect - I wasn't going to get around Dunnet Head today. Oh well, Thurso it was then.
Suddenly the wind reappeared and the last hour was a lumpy slog into a top end F4 again as I held off the cliffs.
But things settled as I entered the bay and soon I was ashore on the beach, before the boat was out of the water an old gent came over to chat.
Again it was a while to get all the gear sorted but eventually I was sorted in the campsite overlooking the bay and out onto the Orkneys - impressive.
Time at last for pie + chips I reckoned - over 2 weeks in(!) except the chip shop had run out of pies! And I was just getting to like Thurso.

Roger's comment about Michal + Natalie's tent in Torquay made me smile all day - 'Welcome to Torquay - just remember you are not here to enjoy yourself!' Everybody in N.I. and Scotland has been so friendly and helpful (even the drunks!) Oh I can't wait to get back over that border once again...
Posted by Performance Sea Kayak at Tuesday, May 01, 2012

No wind tomorrow then about four days of tailwinds.
Barry

Looks like you're heading into a week or so of better weather John...I think you deserve it by now !