Welcome to England - the negative nation. 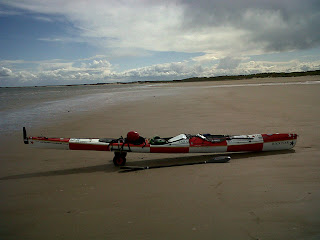 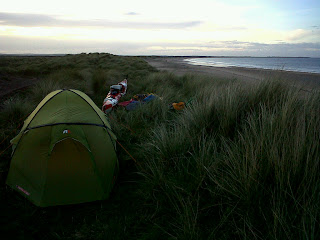 The day started well with a visit from Ollie Jay from Active4seasons, after some inspired detective work from Jimski (John, where are you?) It was pleasant to chat in the sunshine as I loaded the boat and of course the help to lift the boat down to the beach was greatly appreciated. But soon I had to go, I was already late as I had a lazy start as I couldn't face the early start!
The wind didn't have the brutal edge of yesterday but was still rather brisk. I took Ollie's advice to gain what shelter I could. Things went ok down to the impressive ruins of Dunstanburgh Castle where I floated around in the cove to have my lunch. But the exposed section to Coquet was a real slog, I arrived there in a heavy rain squall amongst the shivering Terns and no landing signs.
Soon things seemed to be easing so I decided to head straight towards Newbiggin, but this was a mistake. Half way across Druridge Bay the wind strengthened quickly to around the 30mph mark and I was too far out to head for any shelter. I was finished and headed for the nearest bit of beach, disappointed that I even had to head back N a bit.
I waited, chatting to the locals as squalls blew through and then got back on to scrounge a few more miles when the wind dropped, but without any obvious camp spots it was not really productive.
Eventually I dragged everything into the dunes. It had been a long day but chicken tikka masala and a chocolate pudding improved morale while I watched a cumulonimbus forming out over the N sea. All I can hear are the birds and the steadily building surf, a lovely spot but I'm a little uneasy I can not easily get out of here tomorrow if the swell builds.
There has been a palpable difference since I crossed the border; don't do this, don't do that. If you can do something then somebody somewhere wants you to pay them for the privilege - the only thing that seems free and freely available is dog poo. Welcome to modern England, it's enough to make you head north again.
I here one of the Manchester football teams won something yesterday; that will bring joy and sadness in equal amounts to the Rockpool factory. Cheers to Craig, Pete and Tom - the boat is standing up well to the punishment.

Sent from my phone
Posted by Performance Sea Kayak at Monday, May 14, 2012