So, what have you been up to then?

A good friend phoned, and as is often the case the conversation started with that phrase - 'So, what have you been up to then?' The conversation stalls, there is a moment of hesitation, even disappointment as I reply with 'hmmm, nothing much really I suppose'. A sort of, 'well that knackers that then' start to things.

Later it made me think about just what I have been up to since I returned from the trip; it's two months now since I stepped stiffly onto that windswept and grey beach at Cemlyn and I have to admit that I'm still to fully find my feet once again.

Training wise I just farted about for a while, no real structure, no aim nor motivation. This didn't really surprise, it was expected - though it persisted a little longer than I hoped. I was determined not to fall back into the mediocrity and triviality of modern day life and of course, I did exactly that. It was hard to get excited about things. That said, we started to get a good group together paddling down the Straits in the evenings, we've had some fun and memorable sessions - even some nights with a little sunshine.
Two weeks ago the fog finally cleared though and training started in earnest once again. I need to lose a little(!) weight and get fit again before I can get going properly, so I've got until mid-October to get fit to train I reckon. I'm looking forward to a good winter of hard work, without repeating the mistakes of last winter. I don't know just what I'm training for yet but I'll be ready when it comes - I have a few ideas but I'll keep them to myself just for now.

I returned back to the Rockpool factory; things unsurprisingly had moved on a touch since I had been away and it was a little tricky to pick up the pieces initially. Eventually I got back into working with the 'Tiny Taran' plug. This had suffered from a number of frustrating delays (we paddled the prototype a year ago) and now I was keen to finish it so the boys could build a boat and we could finally get it on the water. I'm glad to say that I completed the shaping of the plug just over a week ago and now it is the hands of the polishing expert to get a good finish ready for a mould to be taken. I look forward to seeing it afloat at last. I'm also intrigued to know what it is going to be named - the working name of 'Tiny Taran' is not considered macho enough. 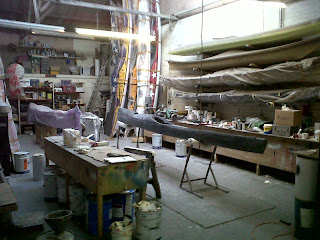 The Performance Sea Kayak website has been taking a little time too as I moved the Gossip page to that 'love it or can't see the point of it' icon of the modern world - Facebook. It seems to be working quite well, though I'm aware that not everyone is into Facebook - it is much easier to put pretty pictures up though! http://www.facebook.com/PerformanceSeaKayak
The PSK website as a whole is due to undergo a major revamp too, though this will take quite a while I think. I'll let you know when it's done.

There was a pleasant interlude last week too as I finally got to meet Geoff Murray and Greg Simson from Tasmania. They were on their way home after a visit to Greenland and Geoff dropped in for a little coaching before his 4* assessment. It was a good week, and Geoff got the piece of paper he was after.

Trying to get my legs to work again, we've been plodding around the hills a little too. Here is a photo looking out over Caernarfon Bay  - where I had a rather lumpy survival paddle on my second to last day.


There has also been a fair amount of soul-searching and thinking, the hills are good for that. I've spent a chunk of time reviewing the trip - and looking at nearly 2000 photos ready for the presentation (how many sodding lighthouses can you have in one camera?).
I know I should be quite pleased with having completed the trip, but I can't say I am really. Unusually  I made a hash of the training last winter and went into things with probably the lowest fitness levels I can remember for a good while. I suppose it was interesting to see that you can still get it wrong after all these years - old lessons relearnt.
At the same time I just wasn't ready for things in some other areas - a touch annoying for a once in a lifetime adventure. It had also been a couple of long years with various other paddling bits and pieces, I think in the end that even the fumes in the tank had finally dried up.

And of course there was the 'R' word to consider - as the subject of retirement rears it's ugly head once again. After 30 years of hard slog, training, sacrifices and no room in the garage - perhaps this could be a logical point to call it a day? But I know what Uncle Geoffrey would say - you'll never retire, just find something else to do. He's rarely wrong.

And so where does that leave the Clockwise Kayak blog. Well, to be honest I think we've been kicking the arse out of it for a while now, so maybe it's time to put the whole UK Circ thing to bed at last? I don't want to bin the whole blog though; so Clockwise will keep going - with the odd update of whatever comes next.
I don't think you will be too excited to read about daily paddling and training (5 x 8' on 2' off at 150 bpm rising per effort - early flood, calm towards Felenheli or 6 x Killer Islands on flood or 3 x BB TT's close to HWS or 10 x 1'on 1'off and so on) but maybe you may find a little more interest in the planning and paddling for the odd race or record that wanders over the horizon. I will write things up now and then. Cheers.


Until then, stick it in and pull hard... 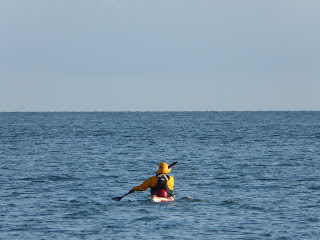