I've written previously on kit, but there's plenty more to say - it is also a subject that I've been asked many questions on. However as I prepared to write this I saw that Natalie had beaten me to it on the HomeSeaHome blog. Unfortunately they seem to be having a few 'kit issues' and I was worried that my post may seem a little insensitive or just rather 'smart-arse' - but sometimes you've just got to write. 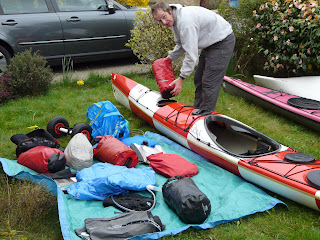 I am very fussy when it comes to kit, ask The Boss or Pete Baars (Summit to Sea). I'll think things through to the extreme and take the fussiness to the point that I frustrate people or seem to cross the Prima-Donna line. But, like others I depend on my kit, sometimes to the limits. I also have a house full of kit from the early days that just didn't live up to expectations, hype or even just to the real world.
And besides all that, crap kit and poor design really winds me up. 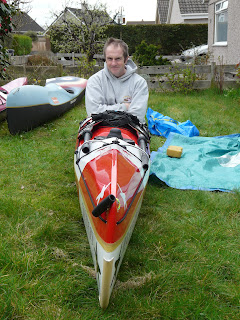 And so when I was getting ready for my trip I spent a lot of time thinking about, testing and trialing kit. Now when I say testing I don't mean just going for the odd Sunday morn paddle with your new toy; the kit was tested in a certain environment, conditions and/or role, then the session would be reviewed (interesting dinner(tea?) table conversation) and often notes made - I don't fart around you see.
And then the whole thing would have to be repeated in different 'environment, conditions and/or role'. You should be able to work out that this takes time, a lot of it and to be honest can become a little tedious - another cold, wet & windy winter day or night paddling a set course, pattern or pace to compare with previous findings. 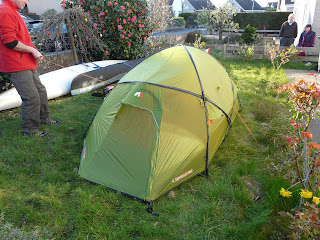 Again this builds a picture; the recent years of records and crossings had put in place a familiar routine of method and kit. When it came to making crossings on the trip it was all familiar, easy, quick and confidence creating - I'd done it before and I knew it worked.

Now, I know I'm far from perfect and believe it or not I don't know it all. I often envy those people who can just 'grab the gear and go' - I don't, even can't, work that way. It's not necessarily the way I choose to be, more just the way I am. It can be frustrating and can cause so much faff, but then it usually works - I've lived this long after all.

So if you are a kit faffer then don't be shy, even rejoice in the fact - it pays in the long run.

The next post talks of the actual kit I took and how it performed - also a little about sponsorship too.

Get that grass cut what have you been doing!!!