So, it's time to reflect on those memorable moments of the adventure that was the UK Circumnavigation - the good and the, well not so good...

In no particular order:

Day 1 - trying to get drinking water on the Isle of Man. First door closed wordlessly in my face, second one answered by a gent with his trousers undone and at half mast. Felt out of my depth from the start.

Day 2 - meeting Ryan and his Grandparents on the beach near Niarbyl (Isle of Man), chatted as the sun went down. We chatted so long that the stove boiled dry, it was a special time with genuinely nice people. I still regret that I did not climb the hill to take up their invite.

Mull of Kintyre - 'My desire is always to be here' - my arse. My trip intro to big swell and nasty conditions - had to turn tail and run through the tiderace at dusk to get out of there. Camped for a day by the toilets.

Arisaig - battle of the torches with the Rozzers.

Day 15 - Rubha Reidh nr Loch Ewe. The nastiest paddling conditions of the trip, if something had gone wrong there, then I figured my future would have been relatively short and unpleasant. The clever money wouldn't have backed me. Just waiting for the 'crack' noise, indicating the timely end of some piece essential kit. I made mistakes and that worried me as much as the conditions. 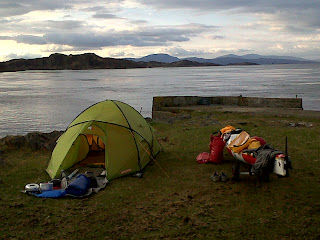 Day 15 - Slaggan Bay - The most welcome beach landing of the trip. 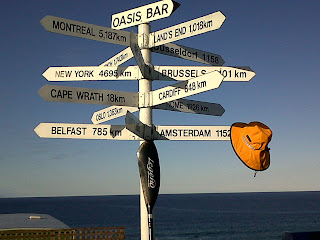 Armadale Bay - a beautiful secluded beach. Out of nowhere Aaron appeared and we chatted of his trip and mine. He was working his way around the country on foot; working and walking as required - it sounded like the right way to do things. I hope it is still working out for him.

Staxigoe - chatting to the last of two fisherman in the tiny harbour. The stories, the history - I sat there enthralled.

Brora 1 - 1 hr before the end of a 39 nm day I get a surprise phone call to say the Boss has arrived and is waiting for me in Brora with a very nice B&B booked too. Priceless.

Brora 2 - The last supper - heading out, confidence dented, leaving Pascale behind to deal with the unpleasant atmosphere there as I avoided the warnings of those who new best. They even sent a guy down to photo my last moments on this earth as I paddled out beyond the break. I'm still breathing boys... 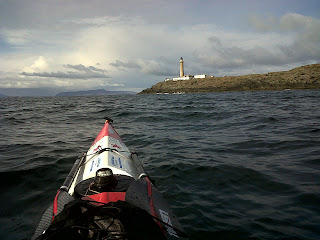 Lossiemouth - crossing the Moray Firth and getting a long lesson in the warnings signs of an impending squall battering - again and again.

Thorntonloch 1 - landing through the surf and gloom to be met by Dave Howie. Standing in the rain and eating cakes. Good to see you Dave.

Thorntonloch  2 - arriving in the morning and seeing the breaking waves - across the tops of the caravans. 'Shit, that's big.'

Thorntonloch 3 - paddling out through a gap in the reef break, to watch it close, for the first time, right across in front of me. By far the longest, fastest sprint of the entire trip.

Berwick - the scariest, earn your money now Fatboy, surf landing that I can remember.

Bamburgh Castle - trying to paddle onto the beach for a desperate break but getting blown off the sand by the offshore wind.

Druridge Bay1 - inadvertently resting the tent pole on an electric fence while putting the tent up. That got my attention, and made me think of all the people who would laugh at that one.

Druridge Bay 2 - stuck in the dunes for a day. Watching the hailstones melt by my Trangia, they lasted for 2 hours - brrrr - 15th May. 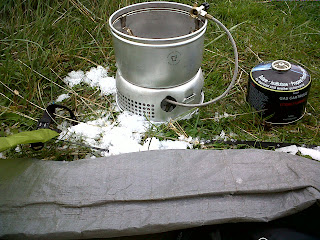 inadvertently resting the tent pole on an electric fence